By far the most productive times for a golf course crew are the weeks after closing and the weeks before opening. This is the time of year where we try to perform our most disruptive, lasting, and satisfying work that results in an improved product for our customers. Many people think that work only occurs when the golf course is open to players and while this may be true for courses that are happy with the status quo; this is definitely not true with us. One of the latest improvements we made this past off season is the addition of the rock and chain barriers that we used to replace the rotten, ugly, and dangerous pine logs on holes 1 and 4 that were almost ready to roll off the hill and hit somebody. 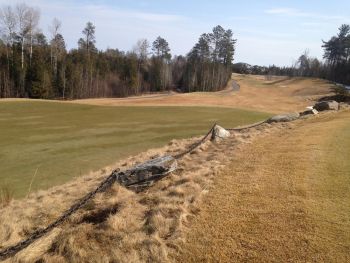 I was inspired to do this after a visit to Canal Park in Duluth and observing some of the ships in the area. The anchor chain we used for this barrier is strong and looks cool-beats the True Value hardware chain for a classy look. The stone varies in weight from 300 to 2500 lbs. per stone. Placing the stones and connecting them together with very heavy chain took some doing but in the end we are very pleased with the result and hope you will be as well. 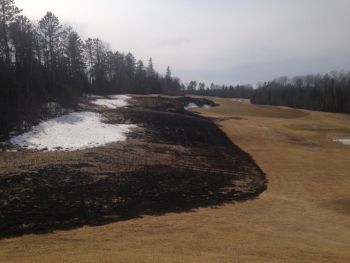 Every year if conditions are favorable, we try to burn some of our fescue areas in the deep rough to help remove some thatch and other plant debris that over time can accumulate and lead to a decline in turf quality. We were very successful in our efforts this year in burning areas on virtually every hole on the golf course. We look forward to how well these areas respond to this treatment. I must stress the importance of having water on hand and ready to be delivered in case a fire goes where it should not. This is particularly important when conditions are particularly dry and winds change without warning. Also vital is working closely with the local DNR in obtaining a permit and then closely communicating your efforts to them. Fires are serious business and deserve to be treated in a serious manner. 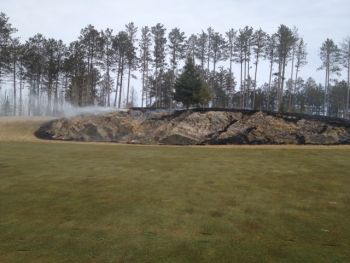 Ledge on Hole 16 shortly after burning. Note undamaged tree from the burning as well as how the burning effectively removed old grasses that would swallow up any shot hit into it.

Most of our regulars are probably tired of hearing about drainage but we again were busy last fall and again this spring in adding over 800 feet of drainage tile-most of which was 6” in diameter. The target this past year was 8 fairway, which has a low lying landing area and many springs feeding it in wetter years. I expect conditions to improve greatly on this hole. In addition, we added some tile in low lying, wetter areas on the driving range that made it difficult to manage. Those areas were just completed a few days ago and will be cleaned up nicely before opening. 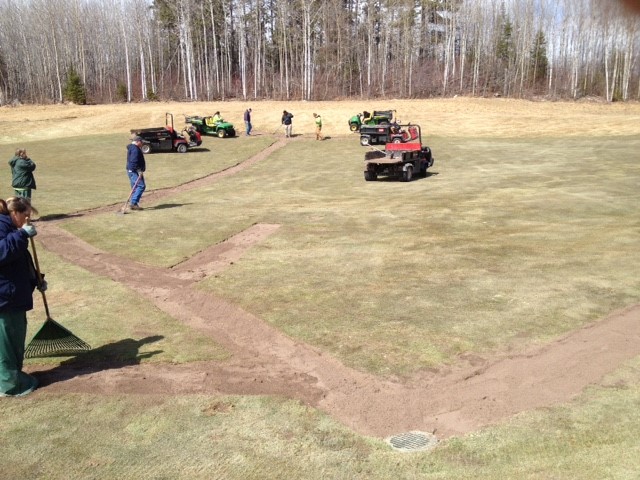 On a final note, after profiling our putting greens, I have found that there really is no need to core aerify our putting greens this spring. Our program of low fertility and frequent topdressing really is paying dividends in the fact that our greens are not thatchy at all. That being said, we will aerify them with less disruptive solid tines before we open to encourage aeration and gas exchange without the level of disruption of hollow coring tines. The labor needed for solid tine aeration is a fraction of what it would be for core aeration. In the end, everybody wins-both our crew and the players.

I have included a few links below that help to explain both the merit and feasibility of reducing/eliminating core aeration practices on putting greens. This is not something we are just making up because we are lazy J In truth, it makes a great deal of sense.

See you on the golf course.