If you have talked to other superintendents or watched the most recent US Open, I am sure that some of you have become a little familiar with annual bluegrass, poa, or Poa annua as it is often called. The plant is widely regarded as a weed in highly maintained turfgrass surfaces though in some cases it can be maintained as the prime turf type on some golf courses. Golf courses like Oakmont in Pittsburgh have putting greens that are almost entirely annual bluegrass and have been regarded as some of the best in the world. I have personally managed golf courses in Illinois with annual bluegrass as the primary grass for putting surfaces and while that posed challenges in the heat of summer when the plants starting stressing out, for the most part they functioned as an acceptable putting surface (when the seed heads are not too prevalent). Poa annua can be an outstanding putting surface in many parts of the country. Annual bluegrass can be a nice putting surface in Minnesota as well if the winter is not especially harsh. Indeed, with our cool, temperate climate poa is often a well adapted species that out competes bentgrass for parts of the year.   The problem arises with the wrong kind of winter. 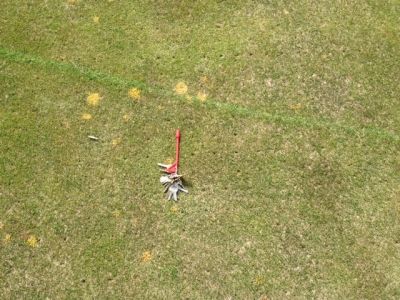 Note the yellow stressed (but sadly not quite dead) annual bluegrass surrounded by healthy creeping bentgrass. I say sadly because we are at the point with our putting greens where the bentgrass population is still high enough to take over the voids left over by dead annual bluegrass-but overall poa is starting to increase in its prevalence. The seeds get tracked in on golfers’ shoes and often invade by germinating in old ball marks. I cannot stress the importance of cleaning your shoes enough. Infestations are the worst on the putting green, 1, 2, 7, and 14 greens. This is a common phenomenon as a golf course ages. If we do nothing, the annual bluegrass population will gradually increase since it can out compete bentgrass in the cooler times of the year. Four out of five years this is not such a bad thing-it is that 5th year when we come out of the winter with dead greens that worries me.

Throughout this past year we have been experimenting, in conjunction with the University of Minnesota, with a new product not yet available commercially but may be available next year for purchase. The Wilderness is one of a handful of golf courses in the nation participating in these trials. The compound was developed in South Korea and the claim is that it removes poa without harming bentgrass. We used it on the 7th green and results so far have been positive. Initially, the green looked worse as the annual bluegrass faded and left behind voids with little or no grass in them. The surrounding bentgrass needs time to fill in the voids-sometimes greens, like a person undergoing chemotherapy, need to look worse before they can look better again. After a month or so, the green on 7 is looking better and better. The goal is a surface which is 100% bentgrass and with this program it may be possible. Our goal, if the product is available, is to add other greens to this program to ensure a better, more consistent playing surface and most importantly putting surfaces which are alive in the spring after the worst possible winter.

Hope to see you all for some great fall golf.

The Wilderness does not have a restaurant at this time. The bar is open and the outdoor grill will serve subs, hot dogs, brats, and burgers from 11am-6pm daily.