This winter has proven so far to be an unusual one for the Iron Range. The lack of snowfall so far this season has been something to be concerned about-not just for area businesses dependant upon snowmobile traffic but also for area golf courses. Normally by January we have a healthy coat of snow on the golf course. This is a good thing as this snow acts as an insulating layer protecting turf from the ravages of cold and dry winter winds. Because we have so little snow, a turf condition called desiccation might be something that we will be dealing with in the spring.

The main reason we cover our putting greens is for protection against winters much like this one. For this reason, I am confident that we will emerge in the spring in decent shape despite the winter challenges-though we may see some exposed areas of the golf course that are damaged. Areas like six tee, 18 tee, and 13 fairway have historically shown their vulnerability to desiccation.

The article below is an interesting read for those interested in learning more.

WATCH OUT FOR WINTER DAMAGE

While this mild winter has been great for holiday travel, it will probably not be good for golf course superintendents. Surprisingly, it is the hard winters that are generally good for the golf course. Snow cover and cold temperatures through mid to late winter protect the turf from desiccation and the golf course emerges in the spring in good condition. It is the open, mild winter with windy conditions like we are getting today that results in drying of the turf (especially bentgrass) and causes damage that can persist well into the spring and even to early summer.

The last few winters have been anything but mild. The white Christmas has been the standard for the last few years and heavy snow cover has been common in many areas of the Midwest. Winter desiccation has been rare and we tend to forget about it. Unless the weather changes soon, this will be one of those springs where severe desiccation is common. In my experience here in Iowa, it is the northwestern part of the state that gets the worst damage because that area lacks tree cover and is exposed to the northwest winds of winter.

So what can you do about it? Greens covers are part of the answer and those of you who covered your greens a few weeks ago should be fine. But, there are many uncovered golf courses in the state. Fairways and tees generally go uncovered and these areas can be badly damaged even on courses that cover greens. Winter watering can be useful if you can do it. When I worked in Colorado years ago, winter winds would kill bentgrass greens and tees if we did not get some water to them during mild winters. It was too cold to charge the irrigation system. The courses had water trucks and it was typical to spray water over the greens every couple of weeks to keep them hydrated.

Topdressing is another way of protecting greens. In the 80’s and 90’s we did some work on this. I will post some information from that work in the next few days. The last couple of weeks I have had some questions on whether it is too late to topdress in January and if it is not, how much topdressing should we apply. I don’t know the answer to those questions. If the mild weather continues, we will try to get a quick trial together at the research station to look at these issues. I’ll keep you informed about the work during the spring. 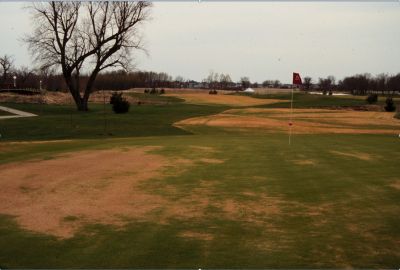 Area that was protected by a cover during a mild winter 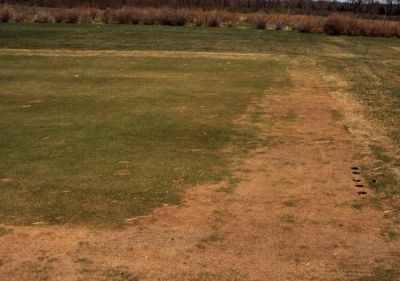 As this winter unfolds we will be updating everyone on the status of the golf course. In the meantime, we should be hoping for more snow.